PHILIP LECANE is launching his new book  “WOMEN AND CHILDREN OF THE R.M..S. LEINSTER”

Further to his book ‘TORPEDOED’, which tells the story of the sinking of the mailboat ‘Leinster’ on October 10th. 1918, Philip has again

combined his skill as a historian with that of his talent as a genealogist, to tell the story of the Women and Children who were on the ‘Leinster’

on that fateful day, a month before the war finally ended.

All welcome to attend this event as part of the 100 Year centenary commemorations of the sinking of the mailboat ‘Leinster’. 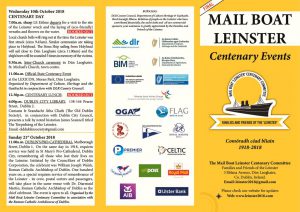