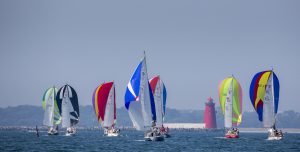 The countdown is on to Ireland’s biggest sailing event, the Volvo Dun Laoghaire Regatta, which takes place from Thursday 9th to 12th July 2015. Set to be an exciting four days of racing in Dublin Bay there will be a fantastic festival atmosphere across the waterfront and Dun Laoghaire town as four sailing clubs, 400 boats and 2,500 competitors come together for the biennial event; Dun Laoghaire Motor Yacht Club, Royal Irish Yacht Club, Royal St. George Yacht Club and National Yacht Club.

The Bay and surrounding area will be a hive of activity for the sixth staging of this event and there will be plenty of action out on the water across 29 different classes racing on eight different race course areas in Dublin Bay and Howth.

The quality of sailing will be extremely high with some of the country’s top class sailors taking part including Olympian, Annalise Murphy and Dave Cullen who will skipper CheckMate XV in the IRC II class, which was the overall winner in the 2013 Volvo Dun Laoghaire Regatta . There are boats travelling from all over the country as well as a large number from overseas and they will be fighting it out for top position in their classes across the four days.

There will also be lots of entertainment for those on land including live music from the Hit Machine Drummers, St. Maur’s Pipe Band and one of Ireland’s best family entertainers, the Great Gazpacho. The entertainment will be spread out along the waterfront to ensure you’re kept amused at all times!

Dun Laoghaire will be the perfect location for a family day out with the delicious People’s Park Market offering some of the best market food available in Dublin and the addition of the popular FunFair Euroshow on Harbour Road, an amusement park that will be sure to entertain the children.

Speaking about the upcoming event, Tim Goodbody, 2015 Volvo Dún Laoghaire Regatta Chairman said; “We are really looking forward to kicking off our festivities on 9th July and welcoming all our 2,500 participants, both Irish and international. We have been working towards this event ever since the last one finished in 2013 and we have no doubt that this year will be just as successful. We are also confident that the Regatta will bring in a significant amount to the local economy. Using the standard tourism formula, the four day event is expected to bring in €150,000 per day and €600,000 overall.”

Adrian Yeates, Managing Director, Volvo Car Ireland, commented; “We are once again delighted to be involved in the Volvo Dún Laoghaire Regatta. This is the fifth event we have sponsored with Spirit Motor Group and it continues our long standing association with sailing globally. It is wonderful to see Dun Laoghaire and Dublin Bay light up over an exciting four days of racing and we wish all participants the very best of luck.”

Deadline for entries is Tuesday 30th June and to enter go to www.dlregatta.org.