On Thursday 9th of July 2015- the RNLI’s  ‘Tonne of Water- Respect the Water’ Campaign began.

What is the RNLI’s Respect the Water campaign?
Respect the Water is the RNLI’s national drowning prevention campaign, which forms a key part of the charity’s approach to halving the number of accidental coastal deaths by 2024. It has been developed using best practice from successful public safety campaigns such as Think! And Fire Kills.

The campaign is primarily targeted at men aged 16–39, who account for the majority of coastal deaths each year. It aims to raise drowning as an important and relevant issue in the UK and Ireland, highlighting the extent of the problem by using strong messaging, thought-provoking statistics, and real stories to encourage safer behaviour. In 2015, Respect the Water will be bigger than ever, with wider-reaching advertising and harder-hitting campaign materials. 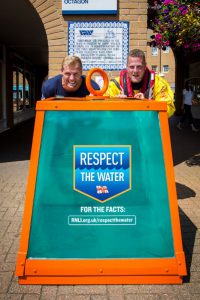 Why is the campaign needed?
An average of 59 people lose their lives in Irish waters each year, which is more than the number of pedestrians and cyclists who lose their lives on Ireland’s roads. 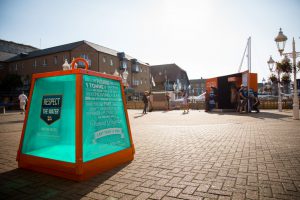 Most of the people who die around the coast each year did not even plan to enter the water – slips and falls while walking and running are a major cause of coastal deaths. And it’s not the adrenaline sports putting people at risk – it’s everyday use of the coast which often results in fatalities.

Through Respect the Water and other coastal safety initiatives, the RNLI is aiming to halve the number of accidental coastal deaths in the UK and Ireland by 2024.

As part of the campaign the RNLI have a tonne of water (as seen above) in place on the East Pier here in Dun Laoghaire Harbour. During the busy summer this tonne is there to bring the “Respect the Water” message to all Harbour users.