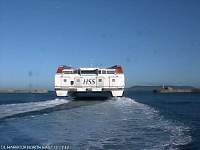 For over 150 years a regular ferry service has crossed the Irish Sea between Dún Laoghaire and Holyhead in Wales. Originally the London and North Western Railway constructed packet ships to ply between Holyhead and what was then Kingstown. One of the blackest days in the history of the ferry service occurred on 10 October 1918 when the RMS Leinster, on route from Kingstown to Holyhead, was torpedoed and sunk by a U boat sixteen miles out from the Harbour with the loss of over 500 lives.

The car ferry vessels, introduced in the early 1960’s, catered primarily for the car tourist and operated from St Michael’s Pier. The mail boats continued to operate from the Carlisle Pier which had the terminal at that point. The St Columba, which was Sealink’s flagship on the Irish Sea, was introduced on the route in 1977 and could accommodate 2400 passengers and 335 cars with a travel time of three and a half hours.

In 1995 a new terminal was established on Carlisle Pier and the HSS Stena Explorer was introduced on the route.

The Commissioners of Irish Lights (CIL) is the General Lighthouse Authority for the island of Ireland (RoI and NI) responsible for the provision, maintenance and management of all physical/electronic aids to navigation (AtoN) and marking/removal of wrecks posing a danger to marine navigation. CIL is also responsible for the superintendence and management, including statutory sanction, of local AtoN provided by ports, local authorities and other bodies. The CIL coastal marine infrastructure (over 250 mainland and off-shore locations) provides the platform for AtoN monitoring, traffic analysis, MetOcean/environmental, commercial and lighthouse tourism services. CIL’s mission statement is “To promote and deliver services for the safety and protection of persons, infrastructure and interests at sea in a modern context” and to ensure Ireland meets its obligations under the SOLAS Convention and supports the trade and tourism sectors. Visit  www.cil.ie/  for more information.

Dún Laoghaire Harbour is used regularly by our naval service. The service plays a vital role of fishery protection and their vessels are often seen tied up at the East Pier. Visit www.military.ie/naval-service/ for more information.

Royal National Lifeboat Institution (RNLI); A fine granite boathouse was erected in 1861 at the root of the East Pier to house the Kingstown lifeboat. Over the years many lives have been saved by the brave actions of the men and women of the (RNLI). A stone memorial on the East Pier was erected to the fifteen crewmen who lost their lives when their lifeboat capsized on Christmas Eve 1895. Visit www.dunlaoghaire-lifeboat.ie/ or RNLI for more information.

The Irish Nautical College and Training school was based in this building at the root of the West Pier from 1951 to 1975. Subsequently the Commissioners of Irish Lights leased the building until 1986 as a training centre for members of the service. In keeping with this tradition Roinn na Mara opened the premises as a Marine Activity Centre in June 1989 to provide a facility for training in sailing and other water sports, safety training courses and lectures on marine matters. There are at present three organisations – the Dún Laoghaire Vocational Educational Committee, the Irish National Sailing School and the

In 8ú Calafort members receive an excellent grounding in seamanship in addition to the other outdoor skills and sporting activities normally associated with scouting such as hillwalking and camping.

In addition to being a Sea Scout Group our group was also founded as an Irish speaking group. Although the group has not managed to maintain the original aim of being fully Irish speaking the use of the Irish language is actively encouraged. We continue to use the language where possible e.g. for boating orders.

Please visit www.8ucalafort.org/ for more information on our group.

The tradition of skiff rowing in Dún Laoghaire originates from the last century when ‘hobblers’, the name given to those who piloted ships to berth in the Harbour, raced against each other. The St Michael’s Rowing Club was formed in the 1920’s by redundant hobblers and members of the famous Workman’s Club who instructed the young men from the area in the skill of rowing. This tradition has continued down to the present day and can often be seen rowing out from their base in the Coal Harbour. Find out more at www.dunlaoghairerowing.com/

There are four waterfront yacht clubs located between the East and West Piers. In addition there are two umbrella Clubs, without premises, the Royal Alfred Yacht Club, founded in 1857, and the Dublin Bay Sailing Club, founded in 1884.

Dublin Bay Sailing Club organises races Tuesdays, Thursdays and Saturdays throughout the summer months. The starts and finishes of the yacht racing can be best seen from the vicinity of the Starters Hut on the West Pier.

For more information on sailing in Ireland go to The Irish Sailing Association at www.sailing.ie

A boatyard is provided in the Coal Harbour for members of the public who do not have access to Yacht Clubs or storage facilities. The two public slipways provide popular access to the water and are a hive of activity in the summer months. The Dún Laoghaire Harbour Company facilitates interaction and meetings with representatives of user groups of the public boatyard under the heading of’The Public Boatyard Users Group’. 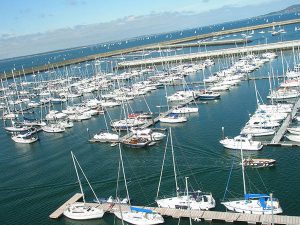 Dun Laoghaire Marina opened on St Patrick’s Day, 2001. Since then the Marina has grown in success and now has capacity for 820 boats. The marina can be accessed 24 hours a day by boats of up to 4m draft. The Marina has berths to suit boats from 6m to 30m in length with a maximum displacement weight of 80 tonnes.

Dun Laoghaire Marina is a Five Gold Anchor rated marina and has everything you would expect from a high standard marina. For more information of the Marina visit www.dlmarina.com