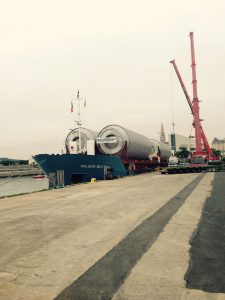 In late 2011, Guinness manufacturer Diageo, announced a significant investment of €153M at the iconic St James’s Gate Brewery in Dublin, the home to the world famous brew since it was leased by Arthur Guinness for 9,000 years in 1759.
Holvrieka IDO B.V. in the Netherlands were awarded the manufacturing of the fermenting tanks and the maturation tanks [some 27 in all].

Mr. Joop Savenije of Bolk Transport oversaw the logistics from start to finish and the entire operation involved 3 vessels [spread over a 4-5 week window] and the transportation from the harbour to the brewery was completed in 4 separate convoys between 22:00 – 02:00 on the nights concerned. Celtic Forwarding Limited were appointed ship’s agent for all 3 vessels.

A unique feature was the use of Dun Laoghaire Harbour, just outside Dublin Port. The harbour has been a hub for passenger ferries spanning two centuries –  and has four significant yacht clubs which caters very well for the leisure activities of sailing enthusiasts on the Southside of Dublin City. Due to height restrictions of bridges on the approach from Dublin Port to Diageo it was not possible to discharge at Dublin Port – a distance of some 4 kms away – hence the use of Dun Laoghaire.

Over the course of several months meetings between the client and partners took place. Crane Hire LTD. provided the cranes, 3D CAD modelling and all associated lifting services at every stage of the project. The tanks were offloaded in Dun Laoghaire and positioned in the brewery using a Liebherr LTM1500-8.1 500 ton and a Terex-Demag AC350SSL 350 ton telescopic crane.

Transportation to the site – a journey of 9 kilometres – accompanied by police escorts– took just under 3 hours on each occasion by Bolk and Aylward Heavy Haulage. 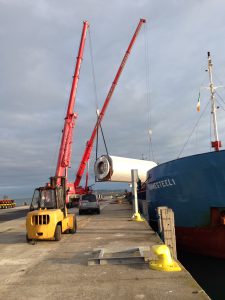