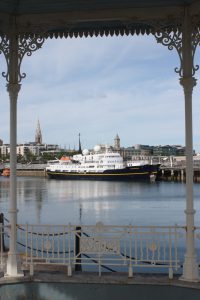 (Wednesday 17th May 2017) As the arrival of swallows heralds the start of Irish summers, the arrival of the first cruise ship into Dun Laoghaire kicks off the towns summer in luxurious style.

Five star luxury cruise ship Serenissima, which weighs in at over 2,500 tonnes, is the length of a soccer pitch, has 59 cabins and a passenger and crew complement of 160 people, will call today, Wednesday 17th May ,allowing its passengers and crew take in the sights of Dun Laoghaire and surrounds.

Welcoming the ship into Dun Laoghaire, Carolyn Hanaphy of Dun Laoghaire Harbour Company said today that “the Serenissima is the first of 8 cruise ship visits scheduled for Dun Laoghaire this summer, bringing with them nearly 3,000 passengers and crew into the town. We are always delighted to see these ships come to our town and spend some time here. Each of these ships is welcomed alongside the historic Carlisle Pier leaving disembarking passengers and crew just 500 metres from the town centre where they can enjoy all that Dun Laoghaire offers in terms of hospitality, shopping and good restaurants and pubs all within a short stroll from the ship.”
Dun Laoghaire Harbour Master Capt. Simon Coate today said that “Dun Laoghaire Harbour Company work hard to secure luxury ships of this kind to come and visit our harbour. The Serenissima which will stop off on her way around the “Gardens of the British Isles” is a charming vessel with a unique style. During a major refit the owners commissioned Swedish interior designers to create an 18th century influenced Gustavian style interior. The unique style and grandeur of this vessel certainly is in keeping with the unique aesthetics of our 200-year-old harbour, making Dun Laoghaire a sought-after port of call on her voyage.”

The ship is on a 12-day cruise of the “Gardens of the British Isles”. She left Portsmouth 7 days ago and has already made numerous stops along the English coast, has stopped off in Bantry Bay to visit Garnish Island and Waterford and now she is calling to Dun Laoghaire to visit Powerscourt Gardens. The ship will continue onto Wales, Northern Ireland and Scotland on route to her final destination in Oban in Scotland. 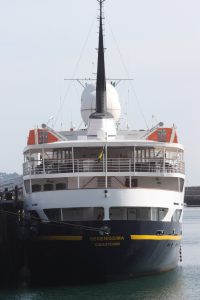 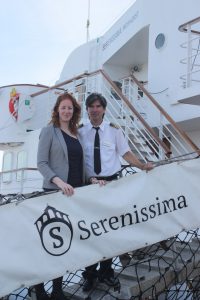