While the sun shone and after months of fundraising by the young, environmentally aware, Flossie Donnelly (11), Ireland’s first Seabin was submerged into Irish waters within Dún Laoghaire Harbour at midday today.

Single use plastics are a real challenge in our modern society. These plastics account for nearly 8 million tons of waste that enters our oceans and rivers every year. While nearly 20 million tons of general waste pollutes our waters globally each year, single use plastics account for approximately 50% of all litter. If this sea-scurge goes unchallenged, it is estimated that by 2050 there could be more plastic in our ocean than fish!

This is why these Seabins are so important so that they can compliment the work of thousands of volunteers across Ireland who capture and remove waste from our waters. As an island nation, we must do all that we can to combat the ever increasing amount of rubbish and plastics polluting our waters.

Today’s Seabin launch has been made possible with the collaboration and support of the Dún Laoghaire Harbour Company, the Dún Laoghaire Marina and Inland and Coastal Marina Systems and all brought together by Flossie herself.

Speaking at the launch, Flossie said “I’m so excited that these seabins are finally being installed and I cannot wait for them to be installed.  I am so happy that all my fundraising has finally paid off with the help of my friends, family and everyone who donated…this is finally going to be made possible!!

I really feel when the seabins are in it will make a big difference with the pollution in the sea locally and I love the way that the seabins will not harm any of the fish in their natural habitat and hopefully soon enough in their plastic free habitat! I’m very excited for ‘a plastic free Irish Sea’. 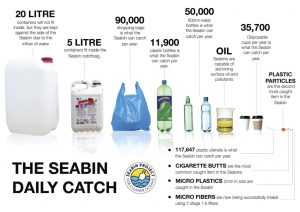 The operations manager of Dún Laoghaire Harbour Company, Tim Ryan said “the Dún Laoghaire Harbour Company are delighted to be involved in this exciting project, made possible by an inspirational 11 year old girl, Flossie. When Flossie first approached us, she already knew what she wanted, to install Ireland’s first Seabin and was well underway with her fundraising efforts. Her resolve inspired us to whatever we could to help her out.

We are delighted that the project is now becoming a reality and that Dún Laoghaire Harbour will be the first location for this important technology in Ireland. Plastics in our seas is a global problem, and if one local girl can make this project happen, the possibilities on a global scale are limitless.

Oliver Shortall, Managing Director of Inland and Coastal Marina Systems (the company that distributes the Seabin products in Ireland and the UK) added “With Flossie’s enthusiasm for this project it was hard not to give assistance in the purchase of the two Seabins in Dún Laoghaire which are the first to be installed in Ireland. We are delighted to be a part of it and wish the Dun Laoighaire harbour Company, Flossie and her family all the best with the project.”

Flossie’s not finished yet, she will be the grand marshal in Ireland’s first “March for the Ocean” which is being organised by Dún Laoghaire-Rathdown County Council and it takes place on Saturday 9th June at 2:30pm from the Royal Marine Hotel in Dún Laoghaire. All individuals, community and enviromental groups across Ireland are invited to join us and you can register your interest on Facebook; https://www.facebook.com/events/647049418963548/ This is part of a global initiative to combat single use plastics.

1) The launch of the Seabin is taking place at the Coal Quay Harbour (near MGM Boats) off Crofton Road, Dún Laoghaire Harbour at 12pm today (Tuesday 22nd May, 2018)

3) View how this Seabin works;  https://youtu.be/SQl0xyKfm6I