The month of September sees the arrival of the annual Oktoberfest to Georges Dock in Dublin. While the city drinks in the German culture Dun Laoghaire Harbour welcomes thousands of German visitors searching for their own slice of “Irishness”.

Dun Laoghaire Harbour is delighted to welcome German visitors in the form of the newly built TUI Cruise ship ‘Mein Schiff 4’ along with a German Navy Corvette visit later in the month. 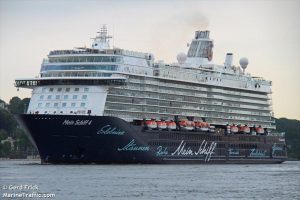 Mein Schiff 4 which translates to ‘My Ship 4” visits Ireland for the first time and calls to Dun Laoghaire on the 18th September with up to 2506 guests and 1000 crew.

The new ship was completed in late 2014 in the Meyer Turku shipyard in Finland. She comes complete with a 25m swimming pool, basketball court, sea view sauna and guests can expect to pay up to €5,495 for a suite on a 10 day cruise on board this luxury German vessel. The ships first sailings in August have seen her travel around the Nordic regions stopping off in ports such as Oslo, Helsinki and Copenhagen.

She will soon start an 11 day round trip departing Hamburg on the 12th September, travelling to Scotland, Northern Ireland, Dun Laoghaire, the UK and back to Germany. The ship will then take to warmer waters later in the year cruising around the Canary Islands.

Mein Schiff 4 guests will be welcomed to Ireland by a host of local Dun Laoghaire volunteers to advise on the best local attractions. The town has also laid on a “traditional” music session for a proper Irish welcome. 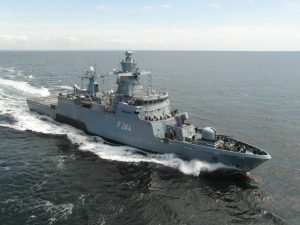 Later in the month Dun Laoghaire Harbour welcomes its second German visitor in the form of the German Navy. The 90m long 1850 tonne German Navy vessel ‘Ludwigshafen am Rhein’ visits the harbour from the 25th – 28th September. The German corvette will be on show at the Carlisle Pier for navy enthusiasts and members of the public 26th Sept 13:00 – 17:00 & 27th Sept 14:00 – 16:00.