harbour users on the water during peak times.

The new patrol boat will be active from June to September this year – 2pm to 8pm during busy periods.

In addition to patrolling the boat will assist the harbour maintenance team with the collection of litter on the water which is a growing issues over the last number of years.

The patrol boat will be maned by the team at the Dun Laoghaire Powerboat School and you can identify it on the water by its dlr branded yellow flag.

Below is a new map to guide SUP/Kayakers in the harbour to enjoy the water safely and be aware of other marine traffic. 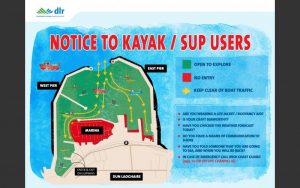 We want to hear what you have to say about any future developments of Dún Laoghaire Harbour and Dún Laoghaire town and invite you to complete all or some of the surveys in the link below.

The surveys are based around:

There are 3 separate surveys contained in the consultation.

You may complete any or all of them, should you have an opinion on the matters.

This month An Cathairleach Una Power switched on the new light ship installation at the harbour round around (Marine Road/Harbour Road).

The permanent light structure is just one part of the Failte Ireland Destination Towns funding received by Dun Laoghaire Rathdown County Council in 2019.

The funding is used to enhance public spaces such as squares, street scapes and markets in a way that will engage tourists and enhance their experience in key towns.

The ship lights are interchangable and will change in the future to coincide with national events.

We want you to tell your story about Covid-19, lockdown, what we have lost, what we have gained, and your hopes for the future and design it into a flag.

Your flag will then be flown with pride on one of the hundreds of boats in Dún Laoghaire Harbour at the end of the summer or when we can safely celebrate together.

Keep an eye out for our videos during the summer as we follow flag makers, listen to their motivations for taking part and watch their story unfold as they get ready for their flag to fly.

Your Covid-19 story may be happy, unhappy, concerned, or hopeful – it’s your memory of the time – the main thing is that it is your unique story and we want you to tell it in the most creative way you can think of!

Want to take part and create a flag? See our website to find out how: https://bit.ly/dlrFlags

Harbour Master Simon Coate has posted the Notice to Mariners 8 relating to the Novel Corona Virus.

Work is due to complete next week on repairs to the seaward side of the East Pier in Dun Laoghaire Harbour.

The project took over 5 months to replace the tonnes of washed away rock armour after Storm Emma battered the pier in 2018.

Individual granite rocks used in the renovation weighed from a few kilos up to ten tonnes each and required specialised equipment to move into place.

The Cornish granite rocks used in the project are the same material used to protect the new pier at the Dun Laoghaire Baths Project.

Due to public safety concerns the Sun Shelter area was closed off and the harbour team began work to repair the damaged wall and a large cavity was opened under the east pier.

1,700 tonnes of granite are now being knitted strategically in a bed below the sun shelter. They form a solid barrier to protect the pier for years to come. The clean new granite can be seen in the foreground of these photos.

The area will soon be open to the public again.

Works to repair the sloping revetment at the West Pier Roundhead were completed last week. 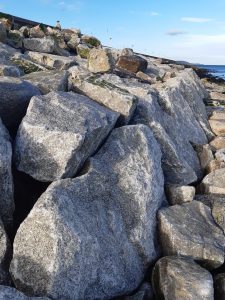 The 2020 Notice to Mariners are now live on https://dlharbour.ie/harbour-information/notice-to-mariners.

Two new Electric Vehicle Charging Spaces are now in operation at the start of the East Pier in Dun Laoghaire Harbour.

The Charging Mechanism was donated by Volvo Cars Ireland as part of their sponsorship of the 2019 Volvo Dun Laoghaire Regatta.

Another initiative to encourage & support sustainable transport are a new set of bike racks.

The racks are located adjacent to the start of the west pier in the coal harbour ( beside the Harbour Splash area).

A very big thanks to all involved in getting these initiatives up and running.

They are open and free to all visitors to the harbour.