We want you to tell your story about Covid-19, lockdown, what we have lost, what we have gained, and your hopes for the future and design it into a flag.

Your flag will then be flown with pride on one of the hundreds of boats in Dún Laoghaire Harbour at the end of the summer or when we can safely celebrate together.

Keep an eye out for our videos during the summer as we follow flag makers, listen to their motivations for taking part and watch their story unfold as they get ready for their flag to fly.

Your Covid-19 story may be happy, unhappy, concerned, or hopeful – it’s your memory of the time – the main thing is that it is your unique story and we want you to tell it in the most creative way you can think of!

Want to take part and create a flag? See our website to find out how: https://bit.ly/dlrFlags

SUPERGRASS, ECHO AND THE BUNNYMEN, FUN LOVIN’ CRIMINALS – SUNDAY 31 MAY 2020

THE LAST EVER TOUR FROM TOOTS AND THE MAYTALS, THE SELECTER, LEE ‘SCRATCH’ PERRY – MONDAY 1 JUNE 2020

TICKETS GO ON SALE FRIDAY 21 FEBRUARY AT 9AM 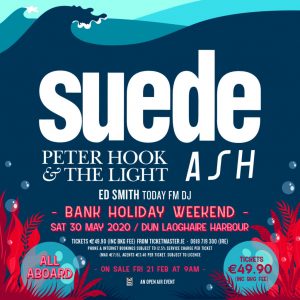 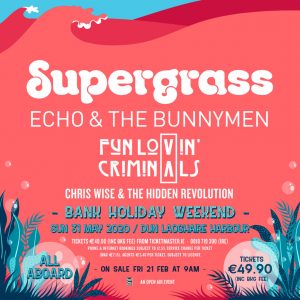 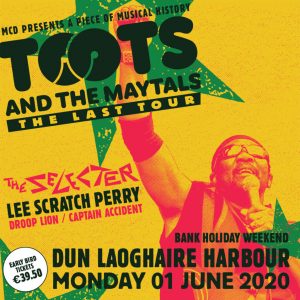 Team BigStyle are extremely excited to announce their next project – right back where it all began in DunLaoghaire. They’re going to create a space in the old Coal Harbour looking right out on the sea which we hope will become a hub for all types of watersports users.

It will primarily be a Stand up Paddle boarding school, complete with chill out areas, changing rooms, clothes and equipment storage, direct access to the water and a whole lot of charm.

While the main purpose of the space will be the SUP school we also plan to have a surf shop and a simple coffee shop where SUPers and their friends can grab a hot drink while waiting for their turn in the water. We’ve also teamed up with the crew over at Clean Coasts who’ll be using this space to spread awareness, launch clean-ups and hold various events

The building is going to be constructed from two renovated shipping containers – one 40 foot and one 20 foot – along with a decking area for outside seating.

Above all they want to be as environmentally conscious as possible – the building will be totally off grid with solar panels, a water harvester, 12v power and as little single use plastic as possible.

Online bookings from May 2020 – https://bigstyle.ie/paddle-boarding-dublin

The event will provide a 20km sea course from Greystone to Dun Laoghaire or vica versa on Sat 28th September at 12noon.

Spectators are welcome to watch the event from the East Pier and cheer the entrants along.

Find out more at https://www.irishcoastpaddling.com/

Harbour Road will be closed between Marine Road and Old Dun Leary Road. Access will be maintained to clubs/businesses on a controlled basis (if /when safe to do so)  via a one way system from Marine Road. Vehicles will be allowed to pass through to Cold Quay bridge, and then exit to York Road or Crofton Road.

Dun Laoghaire Harbour welcomes a season of 1920’s themed Christmas parties to the harbour this winter.

Tickets start from €59 and visitors should expect the following

The stage timetables for Sat 4th and Sun 5th August are below.

The funfair is a family event with funfair rides for all ages along with an amazing sea view.

Ireland’s largest sailing event, the Volvo Dun Laoghaire Regatta, came to a gentle close this afternoon after an exciting four days of racing in Dublin Bay with 500 boats and almost 2,500 sailors competing.

A light northerly breeze of six knots allowed organisers to complete nearly all 290 scheduled races with many class titles hanging on the outcome of today’s final race.

Dublin Yacht Club’s shared the bulk of the overall prizes, awarded this afternoon at the official prize giving at the Royal Irish Yacht Club, winning 19 of the 34 classes including the coveted ‘Boat of the Week’ Trophy.

A final challenge by John Maybury on the Centre Course today in the single race sailed enabled the Royal Irish J109 Sailor to successfully retain his IRC One crown in a highly competitive 26-boat fleet.

In a summer of achievements for Maybury, his Class One defence follows four consecutive class wins of IRC National Championship victories, the 2019 win coming on Dublin Bay last month. Today’s victory was Maybury’s fifth VDLR class win in a row winning first in 2011.

Seven classes included the regatta as part of their championship calendar in 2019: GP14s, 420s and Mermaid dinghies raced for Leinster honours. The SB20s decided regional titles and the Sigma 33s and Beneteau 21s raced for national trophies.

The biennial event is being hailed an enormous success both afloat and ashore for a combined fleet of 498 boats, the biggest on the Irish Sea. Over 290 races on five different courses were staged in a range of light to medium conditions since racing began last Thursday.

Although 230 visiting boats made up nearly half the fleet, yachts from outside the bay area took away only 11 trophies up from seven two years ago. The bulk of the silverware has stayed in Dublin.

Trophies were awarded in each of the 34 competing classes this afternoon, bringing the curtain down on one of the most successful stagings of Ireland’s biggest sailing event that eclipsed 2017’s 470-boat fleet.

Scotland’s Cove Sailing Club took a win in the Sigma 33 Irish open Championships. Howth Yacht Club had six wins in IRC two, two B, RC35 and, the Howth 17s, and non–spinnaker division 1 but outside of that there was only a single win for Belfast Lough in IRC 3, Rush Sailing Club in the Laser Radial and Greystones Sailing Club won both the Wayfarers and IRC Zero.

UK Olympic Gold Medalist Mike McIntyre won the RS Elite Championships that was run as part of the Regatta and the British Sailing Star was also awarded the Regatta’s best visiting boat award.

Full results are available on www.dlregatta.org.

Beatyard are doing various new initiatives this year , and continuing/improving some they did last year.

Eco Bricks is a new thing they are bringing in, and they are going to build some parts of their site with them. Their  ‘Bin It To Win It’ campaign, whereby folks at the festival collect rubbish for us, that we can reuse, you get a free pint per bag you fill !

This year they are extending that to ‘everyone who is a carer’ – eg you may want to come to Beatyard for a day off for example. If you email them  and tell them who your caring for – they will sort you a ticket.

So whether its make the festival more environmentally friendly [ by being on a yard and not distributing nature, we’ve a big head start on most festivals ] or working more with their local community/carers/organisation – they are committed to making Beatyard a positive part of any place where it drops it’s anchor 🙂

– enter the promo code “beatyard33” when buying weekend tickets to get 33% off: www.the-beatyard.com/tickets

Tickets for the daily boat parties, and after parties in Lighthouse & Wigwam are on sale now on Eventbrite, lineups announced very soon