On Bank Holiday Sunday 5th August, 400 swimmers will part in this year’s 88th Dún Laoghaire Harbour Race. This annual event is a celebration of open water swimming and a spectacular occasion for swimmers, spectators, tourists and the citizens of Dublin and Dún Laoghaire.

Leinster Open Sea run calendar of over 40 open water races along the coast of Leinster from June to September each year. The Dún Laoghaire Harbour Race is one of the most high-profile swimming events in Ireland and a “blue ribbon” event on the Leinster Open Sea calendar.

Steeped in history, the Dún Laoghaire Harbour has run every year since 1931, making it the second oldest continuous race in Ireland. This is but one of many features that attracts participants from across Ireland and overseas each year, and this year’s race will host swimmers from the USA, Mexico, Spain, Holland, France, Australia and Dubai.

Leinster Open Sea races emphasise participation, and welcome swimmers from all ages, abilities and backgrounds. Swimmers from 14 years of age up to senior citizens take part in the Dún Laoghaire Harbour Race every year, with competitive swimmers, water polo players, Channel champions and Olympians competing against each other. Two children’s races of 100m and 200m for children aged 13 and younger will also take place just before the Men’s race.

As races are handicapped, every swimmer has a fair chance – you do not have to be a former Olympian to win.

Conor Kearney, of sponsors CJK Engineering, said “CJK Engineering have been involved with Leinster Open Sea for a number of years, and are delighted to be now associated with one of the two Major Races on the Irish open water swimming calendar. It is great to see a sport that caters for such a wide variety of competitors both in age and ability. I wish this year’s swimmers and spectators the very best of luck, especially those who have travelled from overseas, and I hope they all enjoy being “OUT FOR THE DAY”.

Olympic Council of Ireland President and Swim Ireland CEO Sarah Keane, a regular participant in Leinster Open Sea races, said “Swim Ireland is delighted to be involved in this year’s Leinster Open Sea 88th Dún Laoghaire Harbour Race again this year. The event is still evolving with a children’s race and bigger entries for both men and women yet again this year. With the Summer that we have had so far, we really recognise the value of being an island nation. We look forward to this weekend, to supporting our performance athletes in Glasgow and open water swimmers in Dun Laoghaire”.

Commodore Michael J Pomeroy of the Royal St George Yacht Club said “The Royal St George Yacht Club is delighted to host this year’s Dun Laoghaire Harbour Race.  Our club forecourt and slipway offer direct access to the waters of Dun Laoghaire Harbour and Dublin Bay. The ‘George’ truly is a club for all.  As avid sporting enthusiasts, we are always focused on diversification. At present this includes broadening our fun water sports offering.  We therefore welcome this opportunity to support our new friends from Leinster Open Sea and hope that this prestigious swimming race is the first of many such events. We wish all competitors the very best of luck in this year’s race and strongly encourage safe swimming throughout!”

Swimmers in the Men’s and Ladies’ race compete for the coveted Dún Laoghaire Harbour Cups, proudly displayed in the National Maritime Museum in Dún Laoghaire.

Details of the 88th Dún Laoghaire Harbour Race are as follows: 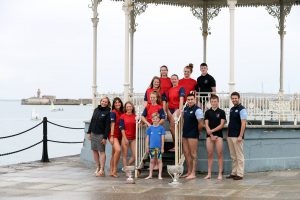 Notes to the Editor:

A pre-race press launch will take place at 10.30am on Monday 30th July in this years’ race venue, the Royal St. George Yacht Club.

Jason Clarke Photography will be syndicating photographs of the Press Launch and the Dún Laoghaire Harbour Race to media outlets after the race info@jcp.ie, www.jcp.ie (01 660 7938).

Press Boat on the Day of the Race

There will be a limited number of places for photographers on the press boats. For more information on this and to book a place, please email your name and number to leinsteropenseaevents@gmail.com.

Leinster Open Sea are a not for profit voluntary body who run a series of open water swimming races from June to September each year along the Leinster coastline. In conjunction with the swimming clubs of Leinster, Swim Ireland and major sponsors Jones Engineering and CJK Engineering.

The Leinster Open Sea website contains details of how aspiring swimmers can sign up for next year’s 2019 Season (www.leinsteropensea.ie). New swimmers are always welcome. Most races are approximately 1,600 metres, however, as with other maritime sports it is not the length of the race but the strength and direction of the tide and sea conditions, which determine the ease or difficulty of a swim.

Leinster Open Sea has received over 300 entries for the 88th Dún Laoghaire Harbour Race this year. There will be competitors of all ages, abilities and nationalities with teenagers pitting their strengths against 70 year olds and swimmers from all over the country competing against each other.

The 88th Dún Laoghaire Harbour Race, as with all Leinster Open Sea races, is a handicapped race with separate races (with the same course) for ladies and men. Based on a swimmers’ performance in the six qualifying races from the Leinster Open Sea calendar, the Handicapping team calculate each swimmers handicap. This will determine when a swimmer will start the race. Slower swimmers will start swimming at “GO” with handicaps increasing in 15 second intervals. The fastest swimmers will often start 10-15 minutes after “GO”. The winner is the first swimmer to pass the finish line. Handicaps gives each swimmer an equal opportunity to win the race and allows a 70 year old swimmer to compete against a young athlete who is competing for Ireland at an international level.