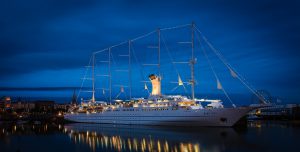 WindStar Cruises flagship vessel, the WindSurf today made the last call of the season to Dun Laoghaire Harbour.

Annually the Harbour enjoys a variety of cruise calls from vessels holding 100 to over 3,000 passengers.

This summer saw a total of eight cruise visits with .circa 10,000 passengers and crew visiting the Dun Laoghaire area and surrounds.

The Harbour was delighted to welcome two new vessels in 2016, the TUI Cruises Mein Schiff 1 and the newly refurbished Hebridean Sky.

Six out of the 8 cruise ships visiting this summer were welcomed alongside the historic Carlisle Pier leaving passengers just 500 metres from the town centre.

Dun Laoghaire County Council town ambassadors along with volunteers from the DLR Volunteer centre created a great atmosphere welcoming the visitors to the town.

Carolyn Hanaphy of Dun Laoghaire Harbour today said “We await the planning decision from An Bord Pleanala about our proposed cruise berth, such that we can attract over 100,000 cruise passengers per year.”