The Dún Laoghaire Harbour Masterplan is a long term vision for Dún Laoghaire Harbour which will be carried out over a 15 to 20 year period and reviewed every five years. The Masterplan was adopted in October 2011 and seeks to bring the 200 year progression of the development of the harbour to the next stage, and to realise its potential as a major marine, leisure, cultural and tourism destination, as well as securing the long-term viability of the Harbour. 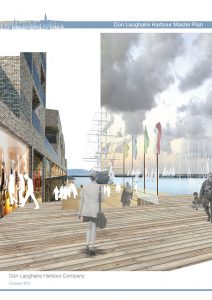 The Dún Laoghaire Harbour Masterplan team engaged in an extensive consultation process beginning in December 2010, holding more than 75 different meetings with individuals and organisations. These meetings augmented the findings of the e-survey and Pier surveys held in January 2011, which gave many people the opportunity to share and discuss their ideas and concerns about the harbour’s future with the Masterplan team. The Public Exhibition, which took place over 6 days in June, attracted more than 1500 attendees to view the Consultation Masterplan. The subsequent feedback was very important in allowing the process to move on to the production of a Draft Masterplan.

In late June, the team wrote to all stakeholders to communicate the next steps in the process, notably the 4 week statutory period for consideration of the Draft Masterplan, the SEA and the Draft Heritage Plan, all of which were put on the Dún Laoghaire Harbour Company website and made available for public inspection from 4th August until 31st August at the offices of the Harbour Company.

A copy of the Masterplan and associated Environmental Report were made available for public inspection at the offices of the Dún Laoghaire Harbour Company, Harbour Lodge, Crofton Road, Dún Laoghaire, Co. Dublin during office hours Monday to Friday 09.00 – 17.00.

Report to determine which plans and programmes are likely to have a significant impact on the environment (current stage).

A detailed statement setting out the nature and purpose of the Master Plan, the screening process used and the full reasons for this determination is given in the SEA Screening Report.

The purpose of this Scoping Report is to assist the Dun Laoghaire Harbour Company, acting as competent authority and the environmental authorities in identifying key environmental issues that may be affected by the proposed Master Plan and that should be addressed in detail in the Environmental Report.

News about the Masterplan

The Dun Laoghaire Harbour Company cruise berth planning application to An Bord Pleanala is now live online. Details can be found at www.dlcruiseplan.ie. This website… END_OF_DOCUMENT_TOKEN_TO_BE_REPLACED